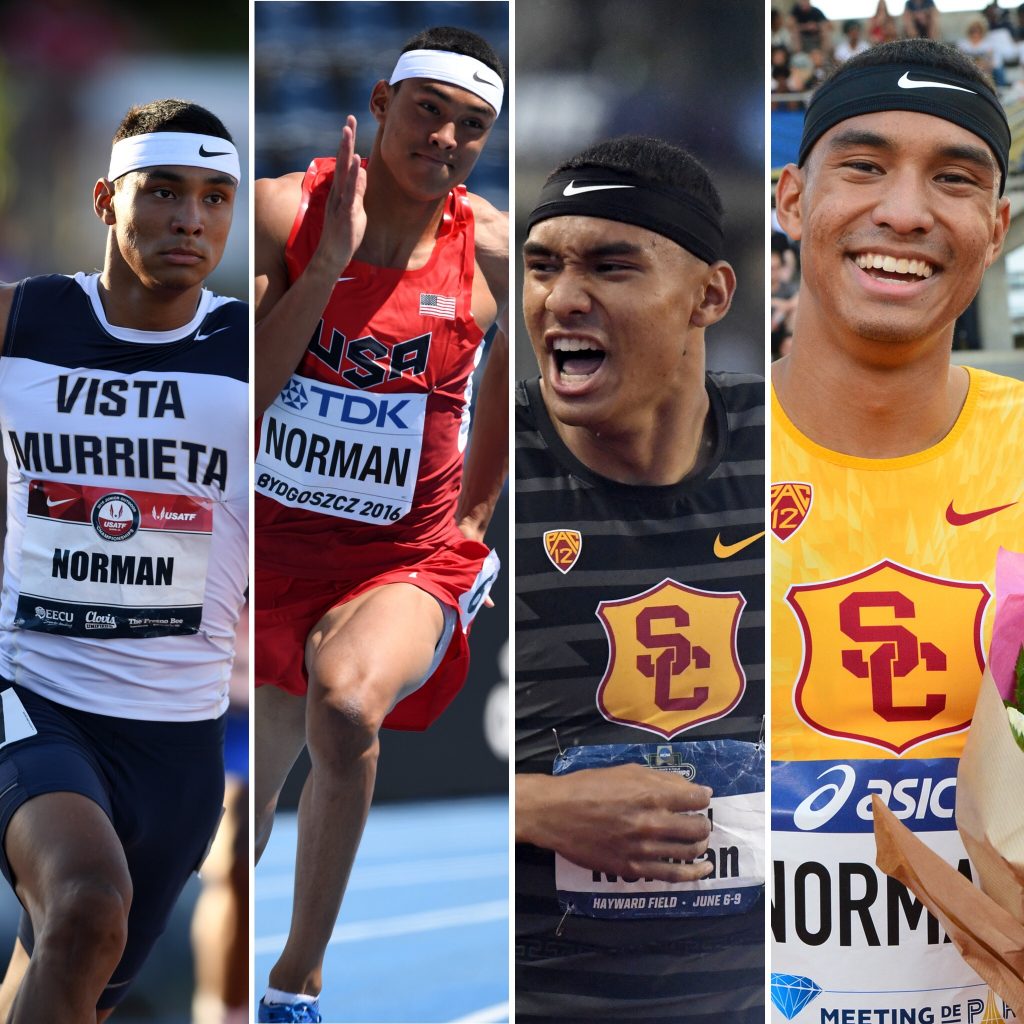 Over the course of Norman’s life, he has proven time and time again that he is a dedicated and focused individual. Whether it’s been excelling academically or in athletics, his discipline has dictated his maturity. Growing up as an adolescent, Norman realized that he had the possibility of making something special happen with his passion in life, Track and Field. Granted, he knew the only way of making his dreams of becoming a professional Track and Field athlete a reality, would be through hard-work, dedication, and steadfast focus. Not once did he waiver from the combination of these ever-present elements in his life. For the charismatic, energetic, and outspoken individual that he is, his actions have spoken louder than words over the course of his young adult life.

Dating back to June 6th of 2015, many Track and Field experts, journalists, and professionals resoundingly agree that Norman had one of the most impressive one-day performances by any high school athlete. Norman broke the National Federation of State High School Associations 400m record with a time of 45.19 at the CIF State Championships at the young age of 17 years old. This performance tied the fastest time recorded in the 400m by a high school athlete competing against other high school athletes. He went on to breeze through the 400m Final, and crown himself CIF State Champ. Later on that same day, Norman went on to win his 2nd individual state title in the 200m with a time of 20.30. Both of these 200m & 400m times ranked top 6 all-time times for United States high school athletes. To cap off the day, Norman led his Vista Murrieta High School to its first-ever state title in any sport. Later on that month, Norman was named the Gatorade Player of the Year. He is only the 2nd non-senior Track and Field athlete to win the award in the 30-year history of the program and first male sprinter to win the honors as a non-senior.

Leading up to the Norman’s champion 2018 season, he set a precedent time in 2017 in his marquee 400m event with a time of 44.60. That personal best time gave him the confidence and drive to train even harder than previous years. The dedication put towards his training regiment spoke volumes to his 2018 campaign. At the NCAA Indoor Championships, which was only his 2nd meet of the season, Norman broke the 400m World Indoor Record with a time of 44.52 crowning himself the 400m NCAA Indoor Champ and later that day anchoring the 4x400m relay team to victory as well. On June 8, 2018, Norman became the 400m NCAA Champ and 4x400m NCAA Champ making him a total 4x NCAA Champion. To cap off his incredible 2018 season, Norman ran two wind legal, sub-20 200m races; the first being at the Paris Diamond League meet where he took home the gold medal and a new personal best time of 19.84 and a silver medal in the 200m at the Lausanne Diamond League Meet with a time of 19.88.

We are not going to jinx anything and say, “Norman is going to do this, he’s going to do that…” Nobody can predict the future. However, to say that the numbers 43.02 are not so far out of the realm of possibility for this young man’s bright future would not be a bold statement to make. All we ask of you Track and Field fans and sports fans in general is to continue to support the dedication Michael Norman has and will continue to put toward his craft, and continue to provide him with your undivided attention. Trust us, it is in your best interest to do so if you are fans of watching special people do special things. Norman signing this multi-year Nike deal will provide him with the needed motivation to continue to be the special human being that we all know he is.